Search for hotels near Otkrytiye Arena

Located in a quiet and picturesque area of Moscow, near the park Serebyanyy Bor, SeverSiti Hotel offers comfortable rooms with free Wi-Fi. Mykinino Metro Station and Crocus Expo are 9 km away. Private parking is provided. 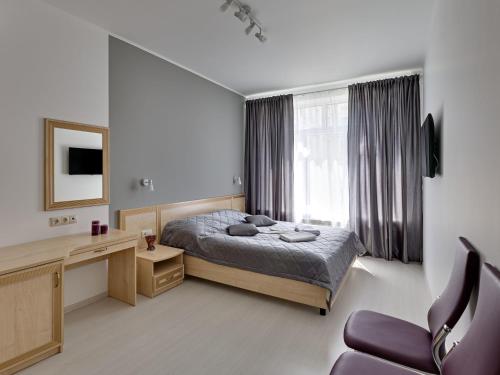 Minima Vodny Hotel is situated in Moscow, just 500 metres from Vodny Stadion Metro Station. The Kremlin is 14 km from the Minima Vodny. Private parking is available on site and free WiFi is featured throughout the property. Offering a fitness centre and an indoor pool, DoubleTree by Hilton Moscow – Marina is located in a business district of Moscow, a 15-minute walk from Vodny Stadion Metro Station and a 20-minute metro ride from the city centre. 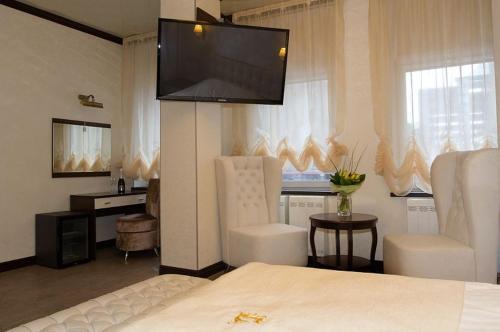 This hotel is located in the north-west of Moscow, a 15-minute walk from Schukinskaya Metro Station. Free Wi-Fi and a 24-hour reception are featured at D'Otel Hotel. The bright, air-conditioned rooms offer black and white interiors and modern décor.

A 5-minute walk to Strogino Metro Station, Mini Hotel Strogino Expo is located in a residential area of Moscow and offers comfortable rooms with free Wi-Fi. The Crocus Expo Exhibition Centre is only one metro stop away.

The Aquarium Hotel is perfectly located for the International trading-center Crocus Expo in Krasnogorsk, at Exhibition Hall 3 of the complex, just 15 km from Sheremetyevo International Airport. Myakinino Metro Station is minutes to the hotel.

Capacity: 45,360
Construction cost: 14bn RMB ($430m)
Websites: Official Website
The Otkrytiye Arena is home of Spartak Moscow. Initially meant to open in 2007, delays in construction including a rejection from the architectural council deeming it too ordinary caused the opening to be put back to 2014. The VTB arena was included in the FIFA bid for the world cup, but having finally opened the Otkrytiye Arena (Spartak Stadium for the world cup - Otkrytiye is a Russian bank sponsor) unsurprisingly took its place. It is one of four Russian arenas that will host the 2017 FIFA Confederations Cup, a prelude to the world cup.

Spartak Moscow are Russias most successful domestic team, second only to Dynamo Kyiv of Ukraine in the Russian leagues. During the 90s they enjoyed a spell of huge dominance, failing to win the league only once between 1992-2001. Kyiv have since joined the Ukrainian league. Spartaks best European Cup run came in 1990-91 season when they eventually fell to Marseille in the semi-finals.

Newly constructed station Spartak is on the purple Tagansko-Krasnopresnenskaya line (line 7) which was purpose built for the stadium. Moscow has three main airports: Sheremetyevo International Airport, Vnukovo International Airport, and Domodedovo Airport. The former of which is the main international airport with six terminals and a wide array of city links. St Petersburg is four hours by high-speed Sapsan train and there are seven daily departures.

Moscow has a hugely vast history far beyond the scope of this article. Since the fall of the Soviet Union in 1991, the city has grown to over 10 million people. The emergence of a previously unseen market economy has led to a boom in Western-style spending and lifestyles. There are many buildings of historical significance: Red Square, The Grand Kremlin Palace, Church of the Ascension etc. Many museums and galleries of touristic interest: The Kremlin Museum Complex, Tretyakov Gallery, or for something different the Museum of Soviet Arcade Machines. Theatre, opera, banyas (bathhouses), and ice skating are all popular activities and shouldn't be too hard to find. You can find anything from goulash to the finest caviar in Moscow.